Back in Riggins, the rest of the Snatch ‘N Release brigade was rolling out of warm beds preparing a lovely bloody Mary and mimosa brunch and a day fishing on the bank of the beautiful Salmon River. The “Dutch II” boat put in far far away.

As the day went on, we danced, fished for steelhead, ate, drank and I don’t think anyone wanted to say it in case it jinxed us. However, layer apon layer of cold weather clothing came off. The sun was shining bright, blue skies with sparse puffy white clouds overhead, and the most shocking thing of all, no wind! Howling wind is almost always present, particularly in winter, but not today. We weren’t huddled around the propane heater, and it felt like a perfect spring day. The fishing was fun even though we weren’t catching any. Our rod’s guides weren’t iced up, herds of elk, bald eagles, hawks, only the mountain goat was missed, but nature displayed it’s beauty with abandon! I don’t believe I’ve ever seen it’s equal, and would be surprised to be that lucky again! 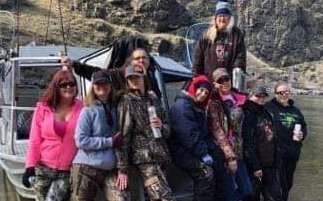 Then my phone went missing. Damn it! I looked, we looked, but it seemed to disappear into thin air. I wasn’t going to let anything ruin this day, particularly a piece of electronics. I was hopeful it would be found. All the photos from that day, lost, but if you’d started at the beginning you’d know, “Would it help?” So, on with the day, heckling another boat all in good fun, sturgeon fishing, and much more grand smiles. Try as we might, not a single fish was hooked. Not a single regret either. We called it a day, and braved the canyon pass yet again. A bit quieter, reflecting on the gorgeous day, no more writing for me, and back to town.

Come to find out the ladies brunch was miserably cold and the wind blew on the Salmon River. After dinner at Seven Devil’s it was obvious friendships had cemented, and the weekend was a tremendous success! A few fish were caught, but none to rival the 34″ current leader. The tournament still going for 3 weeks, but I have no doubt after 25 years this will continue on for many years to come.

I woke the next morning to a foot of snow blanketing everything around me. “The Gods were good,” as Mama Lu used to say!